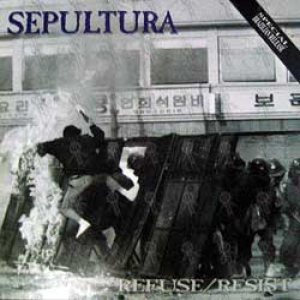 Live tracks were recorded at the city of Barcelona, Spain, in May 31st, 1991.

Released in several forms. Two CD versions exist:
One 3-track maxi-single and a seven-track EP, details of which are listed below. Both come in foldout card digipak cases.
Early limited pressings were embossed with the Sepultura thorned 'S' logo.
In addition, the single was also released on cassette tape with the same B-sides as the maxi single.
The single also saw two vinyl releases, both limited editions. The 7" version was pressed on 7" vinyl with "Inhuman Nature" as the B-side, while the 12" version was pressed on black vinyl but had a die-cut sleeve which was made to look like in had been riddled with bullet holes.