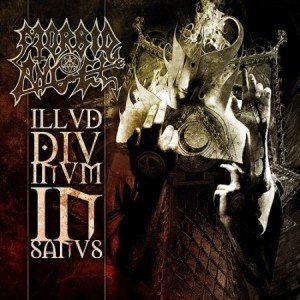 Morbid Angel's first release in eight years, the first with bassist/vocalist David Vincent in sixteen years and also their first full-length album not to feature Pete Sandoval on drums.

The title is badly translated Latin, apparently meaning 'Those Insane Gods' according to David Vincent, however it translates as 'That divine thing, an insane man'. It should be translated as 'Illa Divina Insana'.

The drum tracks to six songs on "Illud Divinum Insanus" were recorded at Mana Recording Studios in St. Petersburg, Florida with engineer Erik Rutan (former Morbid Angel guitarist and producer for such bands as Cannibal Corpse and Goatwhore).

"Illud Divinum Insanus" is available in the following formats:

The wooden foldout box is a triptych made of solid fine wood with all panels engraved, and includes the following items:

Kildneybean   80/100
Jul 8, 2015
Morbid Angel is a band that amazes me with every album. Now, the change of style was drastic in Illud Divinum Insanus which shed a lot of Death Metal aspects seen on their early work. But in my humble opinion, they're doing great with their new style. Tracks like Too Extreme or Radikult show strong Industrial Metal influences while songs like Blade For Baal are more on the heavy side. Enjoyed it!