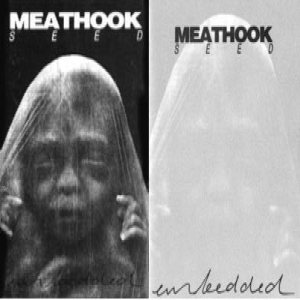 The album exists with 2 different covers.

When Earache initially released 'Embedded' they accidentally pressed a different version of the album to the 'official' release. This incorrectly issued version appears to be an early unfinished mix, and with the exception of last track 'Sea Of Tranquility' every track sounds noticably different to the official pressing, with this earlier version missing numerous samples and
effects and containing material edited out of the final mix. Only 500 copies were pressed by mistake. These 'early mix' CDs are visually identical to the official CD release and can only be identified by contrasting the audio (an easy way to spot the difference is with the opening seconds of opening track 'Famine Sector': on the 'early mix' version there are no bass notes overlaying the opening drum machine beat). ... See More