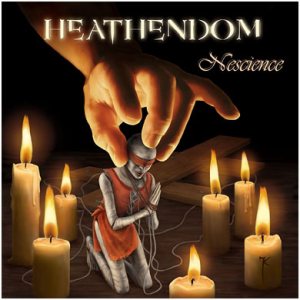 The album was reissued by Metal On Metal Records on June 16th 2010.

The 2010 edition has altered artwork (see the picture), does not include "War &
Pain" original version bonus track, but instead includes "Haunted In Hell" track
in place of "Hell Within".

"Haunted In Hell" (19:19) consists of "Haunted Within" (originally from 2005
demo, but re-recorded in 2010) merged with its second part "Hell Within"
(originally from the 1st edition of "Nescience") with additional arrangements.

The same "Haunted In Hell" suite can be found on "HEATHENDOM" demo - vinyl only
re-release by Metal On Metal Records/Pariah Child (April 2010).