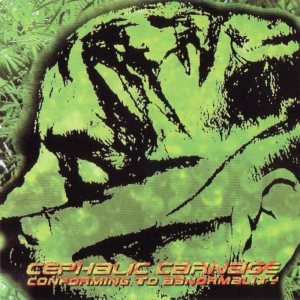 Released on vinyl by Emetic Records (500 Black and 100 clear)

Third pressing (2005) on CD by Subordinate.
The bands considers this pressing as a bootleg, but Subordinate claims to have bought the rights from Headfucker. 2 bonus tracks from the split with Impaled :
9. Observer to the Obliteration of Earth (3:10)
10. Regurgitation Adnauseam and Fecal Decay (1:59)