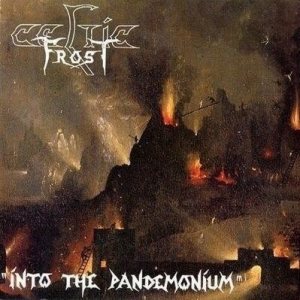 Into the Pandemonium Lyrics (7)

Into the Pandemonium Information

The tracklist reflects the original European LP issue. Some different versions are:
- The Canadian LP lists "Sorrows of the Moon" as the fourth track on the first side, but it is actually "Tristesses de la lune" and "Sorrows of the Moon" never plays.
- The American version also replaces "Sorrows Of The Moon" with "Tristesses de la lune".
- This configuration also appeared on the 1990 reissue.

Released in US by Combat Records/Noise with red logo, title, and lettering.

Into the Pandemonium Reviews

SilentScream213   70/100
Date :  Jun 16, 2020
Celtic Frost were always a strange band as far as Metal went back in the day, but with Into the Pandemonium, they crafted the first album bizarre and eclectic enough to comfortably sit in the Avant-Garde Metal territory still 30 years after it’s creation. There are a couple songs on here with the same Blackened metal approach as Into Megatherion, but I personally wouldn’t call anything on here straight Thrash. There are also multiple interlude pieces, one of which being a sample driven drumbeat, scattered female vocals and symphonic elements, doomy gothic elements, and even poppy hooks, at least half of which are still growled.

Band leader Tom Warrior adopts a new style of singing here, something reminiscent of a whining, moaning cry. It’s very hammy but also sorrowful and pained, so YMMV on whether it’s good or not that this vocal style had a big impact on Gothic and Doom metal in the coming decade. The variety and filler make this indisputably weaker than the debut album, but it is still a unique treasure with a lot to offer.

Into the Pandemonium Comments