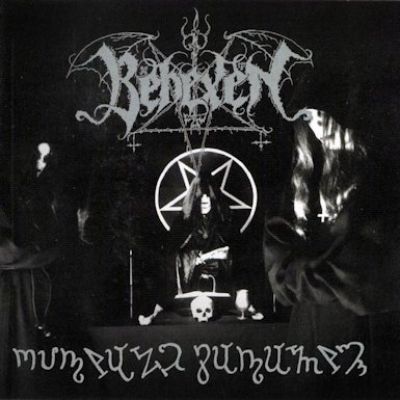 TheBerzerker   85/100
Date :  Aug 27, 2014
Rituale Satanum ; an obvious parody of Roman Ritual, is Behexen's debut album after releasing two demos. Behexen's most distinctive style comes from their vocalist. Torog identifies himself as a Satanist, which is vividly illustrated on their Intro/the summoning. Torog calls on Leviathan, Belial, Lucifer and Satan, followed by the phrase 'Hail Satan'. The phrase is somewhat cheesy but when Torog says it, it actually sounds utterly dark and gruesome.

Their music has some thrash-influence.(I'd like to call it Celtic Frost Influence) With blasting beats in the background pacing the whole riff, the listener can enjoy Behexen's unique and Satanic tremolos. The most impressive feature of this album is no doubtly the vocal sets of Torog. His squeaking, harsh voice makes the album 'EVIL'. There are few 'true' Satanic bands out there in extreme metal scene, but I have never seen any band that surpasses Behexen's raw Satanism. With the First-Wave influence (and there even are some guitar solos that sound like Thrash metal) , I personally got the feeling that Behexen tried to get away from Norwegian Black's influence, yet I believe if would have been better if they have gone orthodox(Although compared to other Darkthrone posers, Behexen's style is godlike) The way I look at Behexen is that they are following the trails of First Wave black metals influences, yet trying to construct their uniqueness by being evil.

Overall, Behexen's Rituale Satanum is an acerbic and raw embodiment of Satanism which is enough to get a reputation for a black metal band.Yet their innate musical style, with some Thrash touch and wild vocals, one cannot help paying them much respect. ... See More