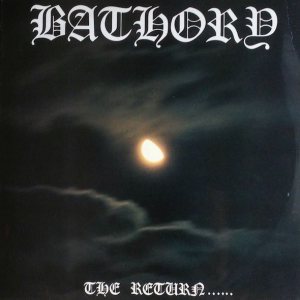 Quorthon explains the name:
"We wanted people to just read out "The return..." - as in a second album or a follow-up - and then flip the album over to look for a tracking list. Not finding one, what they got was this apocalyptic poem with the song titles woven into it. Only after listening through the album to the end would you get the full title of the album: THE RETURN OF THE DARKNESS AND EVIL.''

In CD reissues beginning from 1991 the last 26 seconds of "The Return of Darkness and Evil" is made into a separate track, an untitled outro. ... See More

SilentScream213   75/100
Date :  Jan 5, 2020
Bathory is back at it again with more of the same for their sophomore album. The differences between this and the debut are minimal; same terrible production quality, same evil riffs and lyrics, same snarling screams. Which is good, because the first album succeeded in all these aspects. The songs stay almost exclusively fast tempo, and the drumming definitely sounds more controlled. The good stuff isn’t really better than their debut, but it definitely sounds like the album is more consistent, with almost no weak moments throughout. Bathory would later go on to pioneer new genres of metal, but here they stick to their original style, and there’s not much else to say about it.