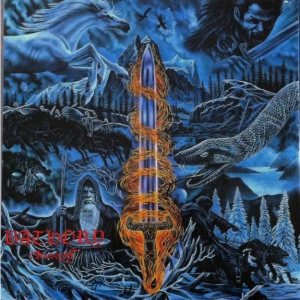 Original material was recorded during three sessions in February and October 1988 and in June 1989 at the Heavenshore Studio, Stockholm, Sweden.

Updated material was recorded in June and July 1995 at the Hellhole Studio, Stockholm, Sweden.

Music and lyrics by Quorthon.

This album was originally recorded in 1989 and was intended to be the fifth Bathory album, but the album was not immediately released and had not been finished properly. Because of this, Quorthon was worried that it drastically presented a departure from the band's original black metal sound, so the project remained in the vault until it was finally redone in 1995. According to interviews, around 40% of the original material dating from the 80s was re-made - the remaining was untouched. This album falls right in line with the Viking era of Bathory.

The 2003 Black Mark pressing has the following tracklisting (although the CD's cover erroneously shows the original tracklisting):
01. Intro/Blood on Ice
02. Man of Iron
03. One Eyed Old Man
04. The Sword
05. The Stallion
06. The Woodwoman/The Lake
07. Gods of Thunder of Wind and of Rain
08. The Ravens
09. The Revenge of the Blood on Ice
10. Outro

A 3-song promo single with the album version of "The Sword" and edits of "The Woodwoman" and "The Lake" was released to promote this album. Both editted songs are only slightly different from the album versions. ... See More