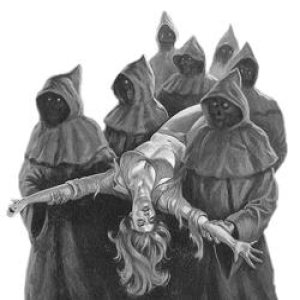 The artwork presented here in the archives is from the original CD-R version.

Pressings:
- First press on CD-R pressed by the band.
- Released on 7" gatefold vinyl by Doomentia Records in 2008 with new artwork. 100 maroon / 400 black vinyl pressed.
- Reissued as a pro-tape limited to 100 hand-numbered copies by Witchhammer Productions in 2008.
- Reissued as a pro-tape by Rusty Crowbar Records on tape in 2011 with re-worked cover art. ... See More