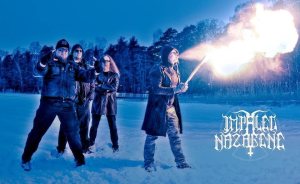 Additional notes
Kimmo "Sir" Luttinen is the younger brother of Mika Luttinen, Kimmo left the band during the recording session of "Hamnasnas" (an MCD never released), after he had fought with the band's bass player at the time, Taneli Jarva. Years later, Sir and Taneli settled their differences and started a band called The Black League.

Impaled Nazarene have always been the centre of controversy. "Suomi Finland Perkele" has received complaints from a youth communist group in Paris, France for its material and the band's very risqué lyrics always seem to be a problem for people to cope with.

When asked about the origin of their name, Mika Luttinen stated in an interview that he had read a pamphlet about Christ appearing to be a vampire. He got to thinking on how impaling a vampire is one of the only ways to kill them and thus, thought of the name "Impaled Nazarene".

The band was infamous for seeming to hate the Norwegian black metal scene back in the early 1990s, but nowadays the band seems to disassociate with such hatred and they also stopped wearing corpse paint in the mid 1990s due to it being "too trendy".
Contributors to this artist